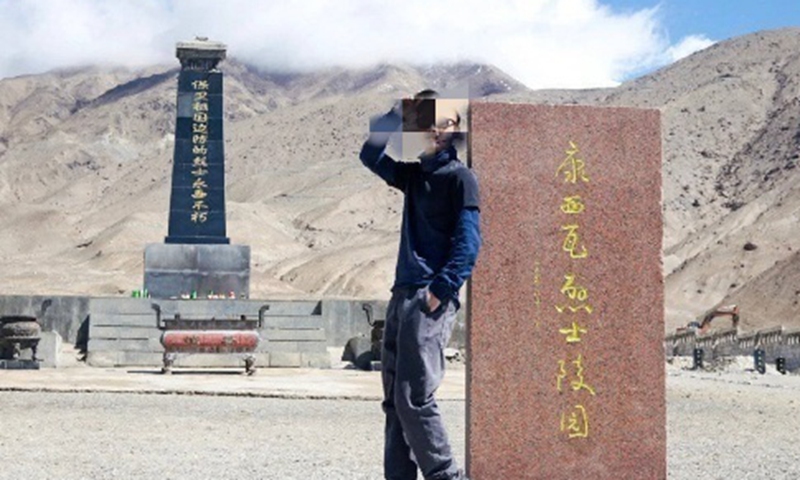 A travel blogger who posed next to the tombstone of Chinese martyrs who died in the Galwan Valley border clash had his account shut down on Chinese social media for “showing no respect” to the heroes. Photo: Dazhong Daily

A travel blogger who posed next to the tombstone of Chinese martyrs who died in the Galwan Valley border clash had his account shut down on Chinese social media for “showing no respect” to the heroes.

The procuratorate organ in Xinjiang responded to the news on Sunday evening on its official account on China’s social media platform Weibo, saying that “they have contacted the tourism department and suggested that the blogger be put on a travel blacklist.”

The local prosecutorial organ has joined the local military to strengthen management of the Kangxiwa Martyrs Cemetery and prevent similar activities against the martyrs, the reply said.

The travel blogger, named “Xiaoxian Jayson,” who had a travel account on Chinese social media platform Toutiao News, was “permanently banned” by the platform on Sunday for posting a blog involving “misconduct that disrespects martyrs.”

“Toutiao will continue to crack down on inappropriate content and has zero tolerance for those who do not respect martyrs. We hope that creators can strictly abide by the rules of the platform,” the platform announced in a statement on Sunday.

The photos were found and posted by another blogger @Taiwan Nadianshi on China’s Twitter-like social platform on Sunday morning, along with a comment: “The tombstone of the heroes defending our country and guarding the border is not a place for you to pose. Please show some respect for martyrs.”

In one photo, the travel blogger poses next to the tomb of Chen Xiangrong, who sacrificed his life at the Galwan Valley border clash, while in another photo, the blogger leans against a monument marking the Kangwaxi Martyrs Cemetery.

The Kangwaxi Martyrs Cemetery, located in the Karakorum Mountains, Northwest China’s Xinjiang Uygur Autonomous Region, 4,280 meters above sea level, is the resting place for martyrs who sacrificed their lives guarding the border. The tombstones of Chen Hongjun, Chen Xiangrong, Xiao Siyuan, and Wang Zhuoran, who died at the Galwan Valley border clash, also stand in the cemetery.

The set of photos has been heavily criticized by Chinese netizens as having no respect for martyrs.

“Being respectful of them is basic moral conduct,” commented a netizen.

In February, the Central Military Commission issued commendations to the servicemen for their role in bravely fighting back provocations by foreign forces at the Galwan Valley. The title of “border-defending hero” was conferred on Battalion Commander Chen Hongjun posthumously, while Chen Xiangrong, Xiao Siyuan and Wang Zhuoran received first-class merits. They all died in a Galwan Valley clash last June, the Xinhua News Agency reported.