WELSON Sim is no stranger when it comes to mental pressure. The Taylor’s student has competed twice in the Olympics.

Furthermore, in the wake of the United States’ favourite gymnast Simone Biles’ shock withdrawal from her team event in the world’s greatest competition citing mental health concerns, it is important to have conversations surrounding athlete mental health.

Dubbed the “handsome sunshine boy”, Sim’s struggle to maintain mental composure is not new, especially being the first Malaysian male swimmer to qualify for the Rio Olympics 2016 under the ‘A’ category in two events (200m and 400m freestyle) at 19 years old when he was least expecting it.

“That year, I didn’t even qualify for the Asian Games or Commonwealth Games.

“Two weeks before a competition in Singapore, I fell sick with diarrhoea and was not able to train. I went to the competition just to have fun, which was what my coach told me to do.

As a result of his history-making feat, Sim found himself hounded by people asking him about his expectations, goals and whether he would bring home a medal for Malaysia.

He was unnerved by the pressure. “I don’t remember anything from the last Olympics (in 2016) because I was too nervous until I became depressed after qualifying for it.”

But, now in 2021, Sim said he was more mentally and emotionally prepared to face Tokyo. 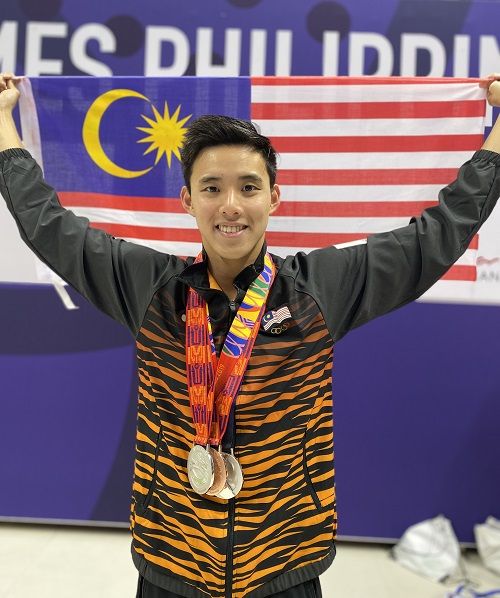 Winning several championships helped in Sim’s mental preparedness ahead of Tokyo, unlike his experience at the Rio Olympics 2016.

Racing alongside some of the biggest names in swimming over the past five years, Sim has also garnered some medals in major championships like the SEA Games and Commonwealth Games that helped bolster his confidence.

But then the pandemic hit.

He was asked to return from his two-year training stint in Australia and had to adapt to the change in coaching style and training programmes.

He also broke a wrist after a car accident in September last year, hindering him from training for three months.

Despite this, Sim was determined not to let challenges dampen his spirit.

One of the key things an athlete needs to master is focus, he said.

“When I jump into the water, I focus on every stroke. I need to be 100% clear on what I have to do because every second counts. I put away all unnecessary things from my mind, especially the pressure.”

Another tip Sim offers is to focus on the present moment.

“Whatever I can control now, I will control it. But what comes later, I will handle it later.”

Sim believes that to excel in anything, you must do it out of passion.

“Enjoy the process and know what you love. You should pursue your passion. Don’t pursue something because someone asked you to, or you’re trying to emulate someone else.”

Sim’s final tip is to not give up, and to not be bogged down by negative opinions or fear of failure.

“One thing that I’m proud of is I never give up. I don’t get distracted by negativity,” said Sim.

“My advice to people is, don’t be too afraid to face failures. If you don’t try, you will never fail – but you need to fail enough in order to be successful one day.”

Sim certainly has opportunities to put his own tips into practice when it comes to his studies as a Diploma in Business student at Taylor’s College.

“There are of course challenges of balancing my training schedule and college schedule. But the good thing is, with the pandemic, all the classes are conducted online, which is more convenient for athletes like me. We don’t need to travel back and forth between the college and training centres,” he said.

To find out more about how Taylor’s College can support your dreams, visit https://bit.ly/TCtaylorsphere