Another piece to Michigan and Michigan State basketball’s nonconference schedule was revealed.

Michigan will host Seton Hall on Nov. 16 and Michigan State will travel to Butler on Nov. 17 as part of the 2021 Gavitt Tipoff Games, it was announced Thursday. 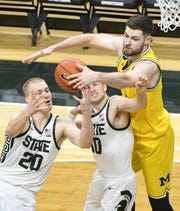 The Wolverines are 2-0 all-time against the Pirates and the programs haven’t squared off since 1989, the same year Michigan topped Seton Hall in overtime in the NCAA Tournament championship game to win the program’s lone national title.

The Spartans hold a 13-11 edge in their series against the Bulldogs, with the last meeting coming in a 2010 national semifinal in Indianapolis and resulting in a 52-50 win for Butler. Michigan State is also 4-8 on the road in the series and will be making its first trip to Hinkle Fieldhouse since 1971.

Michigan is 2-1 and Michigan State is 1-0 in the Gavitt Tipoff Games, the annual event in its sixth year that matches up teams from the Big Ten and the Big East and was canceled last year due to the COVID-19 pandemic. The Wolverines lost to Xavier at home in 2015, hammered Villanova on the road in 2018 and beat Creighton at home in 2019. The Spartans made their first appearance in the event two seasons ago with a road win at Seton Hall.

The rest of the matchups are Ohio State at Xavier, St. John’s at Indiana, Providence at Wisconsin, Illinois at Marquette, Rutgers at DePaul and Creighton at Nebraska.

Tip-off times and television information will be announced at a later date, with games appearing on FS1 or Big Ten Network.