If there are no winter high school sports seasons in the D.C. area this year, what can aspiring college athletes do to get noticed? 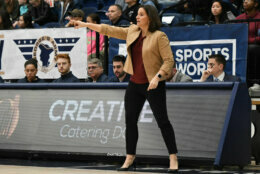 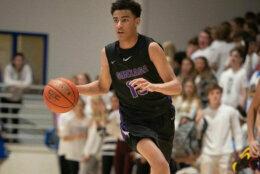 While some Amateur Athletic Union (AAU) and travel teams for high school-age athletes held practices and games over the summer, most school teams — even deep into the fall semester — have been on an extended break.

Public schools in Virginia recently started practicing, and the first games since last spring are set to tip off this week. But in D.C. and Maryland, most high school sports have been pushed off until 2021.

With new COVID cases increasing daily, it’s not clear whether those seasons will even happen. So it’s no surprise that athletes who want to pursue their sport in college are anxious. After all, how can they catch the eye of a recruiter if they can’t play?

Some athletes, like those who compete in swimming or track and field, can prove themselves to college coaches by posting their most recent times in the backstroke or the 800-meters. But what about kids who play sports like basketball, where the eye test is so important?

Coaches like Jen Rizzotti, who leads George Washington University’s women’s basketball team, want to see kids play in person, or at the very least on video. That’s hard without any games.

“I definitely feel like there’s something missing, for sure,” Rizzotti said when asked about being restricted to watching video. “It’s not the same, but I think when it’s your only option, you have to figure out how to look at it differently.”

For athletes who have gotten taller, stronger or improved their outside shot, the pandemic delivers a double whammy: Not only are they missing a season of playing for their school, in front of classmates, but they’re also missing a chance to showcase their literal and figurative growth.

Jared Turner, a 17-year-old 11th grader who plays basketball at Gonzaga College High School in D.C., fits that description. Turner’s sophomore season was limited due to stress fractures in his left leg, and in the last 10 months, he’s grown 3 inches.

“I just can’t believe my junior season might be gone,” said Turner, whose father Stephen is the school’s coach.

While he already has some scholarship offers from Division 1 schools, Turner said he was hoping to showcase his skills to top schools with a full season in the ultracompetitive Washington Catholic Athletic Conference.

“This was supposed to be the breakout year for me and a lot of other kids, too,” Turner said. “I just wanted this to be the year where I started to shine, and people saw how much I’ve improved and how much I’ve grown as a player.”

Turner is not the only concerned high school athlete in the D.C. area.

“Anxiety is a good word, whether people want to admit it or not,” said Alex Harris, who interacts with hundreds of teenage basketball players via his Northern Virginia-based company, Evolution Basketball Training, which offers camps and one-on-one skills coaching.

“It’s definitely a struggle to think about going a winter without a basketball season. None of us have ever done that before.”

While Turner is lucky to already have caught the eye of some recruiters, a canceled or severely shortened season will hurt sophomores and juniors who thought they would get significant varsity time in 2020-2021.

Rizzotti said some late-blooming seniors may also be affected, but she and most Division 1 coaches have already promised this year’s scholarships to athletes they identified two years ago.

In her fifth year at G.W., Rizzotti — a former college player of the year at the University of Connecticut in the 1990s — said in most years, teenagers play so many games between their school and travel teams, that good players have already been identified. She admitted, however, there could be a pandemic-induced recruiting blind spot.

Here’s how she suggests fixing it.

Harris recently organized a Zoom roundtable where one of the topics was how high school students can get noticed if their season is canceled. A panelist was Josh Merkel, the men’s basketball coach at Randolph-Macon, a Division 3 school near Richmond.

“I love taking a thin slice. Most highlights are 3 to 5 minutes. I’ll give it one minute and then I might give it another minute. But then maybe I want to see a full game film,” said Merkel, whose teams have recently been among the country’s best small schools.

If you’re a player like Turner, who has gotten better or bigger in the last few months, you might even organize a scrimmage as a way to get some new video.

“A lot of things college coaches wouldn’t do before, [watch] pickup basketball for example, I think they’ll be happy to do now to get a glimpse of a player, because it might be the only option,” Harris said.

Here’s how the coaches recommend setting up a video:

Rizzotti said highlight videos where a player is making every shot are only so valuable. Context is important.

She said sophomore and juniors should still be OK if they don’t play this season, but generally, high school athletes who want to play their sport in college need to be realistic about their skills. After all, not everyone is good enough to play at the University of Connecticut.

“Make sure they’re looking for good opportunities and [don’t] let them pass them by,” Rizzotti said. “College basketball is college basketball. So if you have an opportunity to play at a school that’s a great fit for you academically and personally, it really doesn’t matter where it’s located and what level it is.”

During Harris’s roundtable, some parents and coaches discussed the idea of taking an extra year between high school and college by going to a prep school for a post-grad year. While that does make sense for some, Merkel echoed Rizzotti, remembering what he was like as a high school senior.

All the coaches said high school students who see themselves playing in college should be sure to stay in shape and work on getting better, even if they don’t play this winter. The year off from games could eventually pay off, Harris said, noting that kids are often playing so much, they don’t have time to work on their individual skills.

Even with all of the adult advice, a teenager like Turner still feels frustrated by the uncertainty. After all, he expected by now to have a few games under his belt this year, playing in front of classmates, friends and family.

“I just really hope we can get some kids the chance to play the sports that they love and they want to have a future in,” Turner said. “They all just want to do the thing they love for one or two more years.”