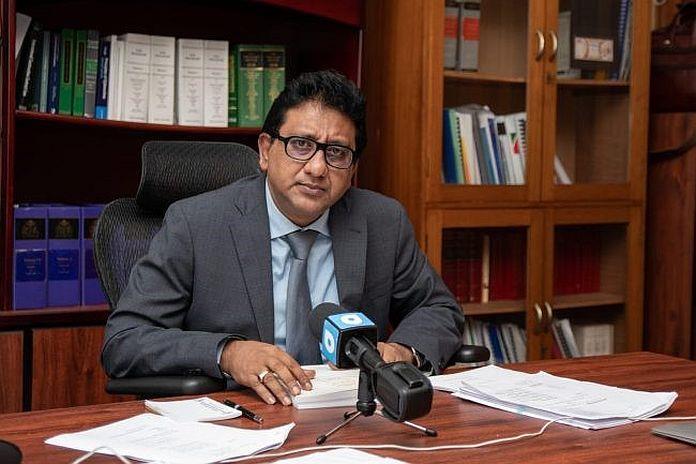 GEORGETOWN, Guyana, (DPI) – Attorney general and minister of legal affairs, Mohabir Anil Nandlall says the government is trying to prevent possible sanctions for enabling an environment for Trafficking in Persons (TIP); stated, it is, for this reason, president Dr Mohamed Irfaan Ali instituted a visa requirement for Haitians seeking to enter Guyana.

Local records show that some 38,187 Haitians who entered Guyana cannot be accounted for. This, he said, has become a cause for concerns for the government. The attorney general said between 2015 and 2021, some 42,100 Haitians legally entered the country; however, only 3,913 left.

‘Trafficking in persons is one of the most serious offenses afflicting the world today. Human smuggling is a major international threat in today’s global environment, and it is against that backdrop that one must view the decision of the government of Guyana.

Guyana is a very close-knit society. I don’t think anyone can argue that 38,187 Haitians are with us in Guyana. It would be impossible and improbable for anyone to try to articulate such a contention. It is plainly and manifestly false if anyone would attempt to do that. So where did 38,187 persons go?’

The government intelligence indicates that many of the Haitians who came are women and children, including pregnant mothers and underage girls.

‘When they enter into Guyana, from all the evidence, and we have accumulated evidence over a protracted period of time, there is a highly organised operation that has all the trappings of an organised ring that deals with these Haitians.

“From the time they leave the departure lounge of the CJIA, they are whisked away into waiting vehicles and they are taken to destinations in various parts of the country.’

The trend shows that their travel and other identification documents are seized, while they are kept in secret accommodation by the persons in charge of the operation.

The attorney general noted the most recent incident involves 10 Haitians, none of whom are older than 23, who came to Guyana illegally through Suriname. They include five women, one of whom is pregnant, and five men. The 10 young people were discovered by police in rooms at a Skeldon, Corentyne hotel.

The group is currently in government care while police investigations continue.

The attorney-general said the decision to quash the visa-free entry for Haitians was carefully analysed for months. Deliberations included discussions with Brazil, whose leaders expressed concerns that Guyana is being used as a transhipment point for this organised ring. The government had also engaged Suriname and Cuba, whose leaders expressed similar concerns. The government’s concerns were also shared with the United States, United Nations human rights organisations, and the International Criminal Police Organisation (Interpol) … the decision was taken.

‘Guyana is part of a global village, and Guyana, as every country in that village, is required to sign on to international conventions, and is expected to execute certain protocols which are required internationally.

“Guyana is not without experience when it comes to sanctions being imposed on it,’ the attorney-general added.

He recalled an incident prior to 2015 when the People’s Progressive Party Civic as a minority government, where the combined opposition refused to support legislation relating to anti-money laundering and countering the financing of terrorism (AML/CFT).

‘As a result, a whole constellation of sanctions was imposed on Guyana’s financial sector. Up to now, we are still battling to remove those sanctions and the stigma that it carries.’

The attorney-general said the government has to face regular assessments of its AML-CFT structure, to ensure that it is not contaminated with illegal funds and that it is not a haven for drug trafficking, terrorism and money laundering.

Similar obligations in relation to human trafficking and smuggling led the government to take the decision to impose the visa requirement on citizens of Haiti. The attorney-general relayed that Guyana is not alone in imposing this requirement, pointing to Trinidad and Tobago, The Bahamas, Jamaica, Antigua and Barbuda, Saint Lucia, Belize, St Kitts and Nevis, and Dominica.


Legal Disclaimer: MENAFN provides the information “as is” without warranty of any kind. We do not accept any responsibility or liability for the accuracy, content, images, videos, licenses, completeness, legality, or reliability of the information contained in this article. If you have any complaints or copyright issues related to this article, kindly contact the provider above.