Frederick Marshman Bailey achieved great success as a British intelligence officer. His shooting skills earned him an improbable reputation during numerous undercover missions. He was a leading combatant in the Great Game and undertook important explorations in Tibet. This included tracing the course of the Tsangpo-Brahmaputra, which had previously baffled explorers. But his pastime of netting butterflies was more interesting to him than anything else. 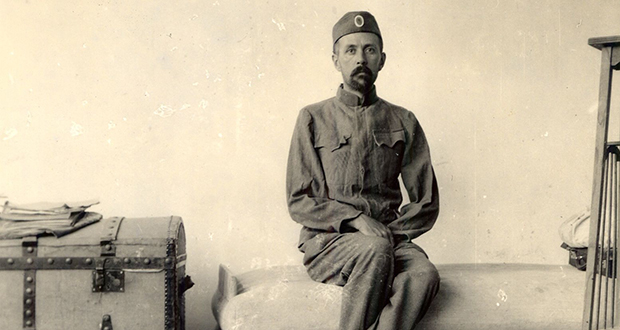 Born in India, Bailey relocated with his family to England at a young age. He was groomed to follow in the footsteps of his military father, who had been an officer in the Indian Army. By the age of 20, Bailey was an army lieutenant. After he studied Tibetan, his career catapulted.

At the time, Tibet had been an elusive land for the British. Previous unsuccessful attempts had sought both to form alliances and to ambush the country. Thomas Manning had successfully entered 90 years earlier but failed to return with anything of geographical significance. The British still needed to build relations with Tibet and especially to map the Tsangpo River.

In 1904, Francis Younghusband led a controversial attempt to invade Tibet, in which Bailey took part, thanks to his language skills. A monumental force of 1,200 troops marked the last grand imperial swing of the British.

By far the biggest challenges were the rugged, high Tibetan plateau and the gnarly weather. Pack animals died, altitude illness flourished, and guns malfunctioned in the cold. Ink in pens froze, and even kerosene needed thawing. But when it came time for battle, the war was unfair. The British military was the most powerful on earth, while the Tibetan force was almost nonexistent.

In less than four minutes, 2,000 British bullets mowed down the Tibetans. Over 600 died and more than 200 were wounded. There were no British fatalities.

Yet despite the importance of Bailey’s military work, he preferred stalking and killing animals.

It didn’t matter that Tibetans considered all living beings as sacred. Bailey shot gazelles and blue and argali sheep for his own amusement. The Dalai Lama had earlier placed a ban on shooting creatures, but Bailey took no notice.

In 1904, the British triumphantly entered the west gate of Lhasa. Bailey blithely summed up those days in his diary: “Went to monastery. Lama ran amok.” Or “Auction of silks. Football. Out Fishing.”

Bailey seemed able to detach himself from reality. The lama he referred to had in fact broken into the British camp and slashed two officers in an act of revenge for his dead brother.

When the rest of the troops withdrew, Bailey stayed behind. Swiftly, he transitioned from soldier to explorer.

Bailey was now a junior officer on a mission to western Tibet. He was excited for the opportunity. “There ought to be very good shooting along the way,” he wrote exuberantly. Before long, he assumed another position. This time he became a Trade Agent in Gyanste, historically the third largest town in Tibet.

Although mapping was never his primary interest, Bailey took the opportunity to begin charting the long-coveted route along the Tsangpo River. The task momentarily occupied him until he returned to Gyantse to resume his Trade Agent status. He spent almost three years there.

Most British soldiers found Gyantse boring, but Bailey had endless fun shooting things. Locals could never understand his joy in murdering sentient beings. To supplement his income, he sent his trophies to museums in India and England. One of those was a new snake species he’d captured at 4,000m. Known as Thermophis Baileyi, it is the world’s only high-altitude snake. It was one of a few specimens named after Bailey.

Soon he started a small exotic animal collection. It mostly consisted of wounded animals he’d shot and attempted to nurse back to health. He kept a couple of Tibetan wolves, a monkey, spaniels, a gazelle, and a badger. None survived very long. The three snow leopards he held captive in 1908 also perished within weeks.

Despite his persistent disrespect for Tibetan customs, Bailey did the Tibetans a good turn. In 1910, when Chinese troops stormed into Lhasa, Bailey had the brilliant idea to disguise the 13th Dalai Lama as a post runner. The Dalai Lama was able to flee safely to India.

Bailey briefly returned to England, where he took particular interest in dining ladies at the Ritz or the Trocadero. His adorations were fleeting. His interest in civilized Western lifestyle was fleeting too. He made his way back to Asia.

After an excursion on the Tsangpo River that was mostly for the joy of netting butterflies, he joined another expedition to Sadiya, in India.

During this expedition, Bailey and his 25 troops and 90 porters annihilated several villages. Showing as much empathy as he did to the snow leopards he’d caged years earlier, he speared his way through everything in his path. Then it was back to the Tsangpo River once again to net butterflies.

For such a stalwart explorer, Bailey’s preoccupation with butterflies was unusual. Those who met him found him exuberant and eccentric. But his pastime indirectly reaped great rewards.

His multiple short, frivolous attempts to explore the Tsangpo River proved especially useful after he enlisted a surveyor in 1913. Captain Henry Morshead helped him map the region more thoroughly.

Morshead had spent six years surveying India and was deemed one of the world’s best at the task. The pair set off to track the unknown area between Tibet and Assam and solve the basic riddle of the Tsangpo River: Where did it flow?

Naturally, Bailey was more interested in collecting specimens. He led the pack, keeping watch for butterflies, while Morshead trailed behind mapping.

As they followed the Tsangpo River through difficult mountains, Bailey netted a collection of rare species. Over six months, he collected 2,000 butterflies from 200 different species. Some of them were previously undiscovered.

Some of the flora and fauna he preserved for science. Others, he ate. When he encountered wild goats the size of a buffalo, he shot several of them for his guides to eat. Not all species were welcome, though. They also combated leeches and ticks. Once, Bailey plucked 150 leeches from his skin.

They slept in caves at night and followed wild goat trails by day. Sometimes they struggled in the slippery snow.

By the time they emerged, they’d been robbed and were flat broke. They managed to borrow fare for a train ticket to Calcutta. Bailey brought with him 37 rare bird specimens. He also became recognized as an authority on the butterflies of the region.

Bailey’s antics took a peculiar twist when he went AWOL for 16 months. Hiding in Central Asia after fighting broke out between Bolsheviks and British Troops, he managed to escape prison or worse. His elusiveness was a testament to his skills of zigzagging seamlessly between explorer and secret agent.

In 1921, Bailey married Irma Hepburn. The couple promptly set off by ship to Sikkim, in northeastern India. Here, Bailey took up a prestigious new position as the region’s Political Officer. In their two-storied mansion modeled on an English country house, they also began breeding dogs. 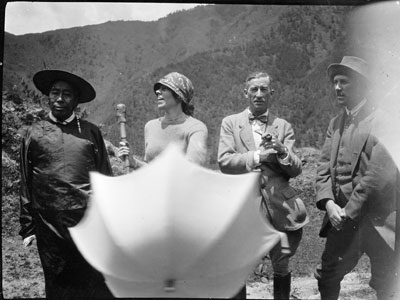 A rare photograph of Eric Bailey with his wife Irma. Bailey had a penchant for evading the lens by obscuring his face from view.

The couple never had children. When Bailey wasn’t engaged in duties, they indulged in travel. In 1929, when he bumped into Younghusband on the streets of London, they had with them 13 Lhasa Apso dogs. They’d successfully introduced the breed to British society.

Bailey continued to work in His Majesty’s Service, though his career was tapering off by then. When he was 56 years old, he retired. This led to even more recreational travel with his wife.

As an expert on Tibet, Bailey was made honorary librarian of the Royal Central Asian Library in London.

The Baileys bought a new country estate in England that was large enough to house Bailey’s butterfly and stuffed animal collection, which included stuffed Tibetan pheasants in glass cabinets. Preserved heads of wildlife from his hunting trips adorned the walls.

In 1967, Bailey died from natural causes. Perhaps taking a tip from Sir Richard Francis Burton‘s spouse, Bailey’s wife burned much of his papers in an attempt to preserve his reputation. 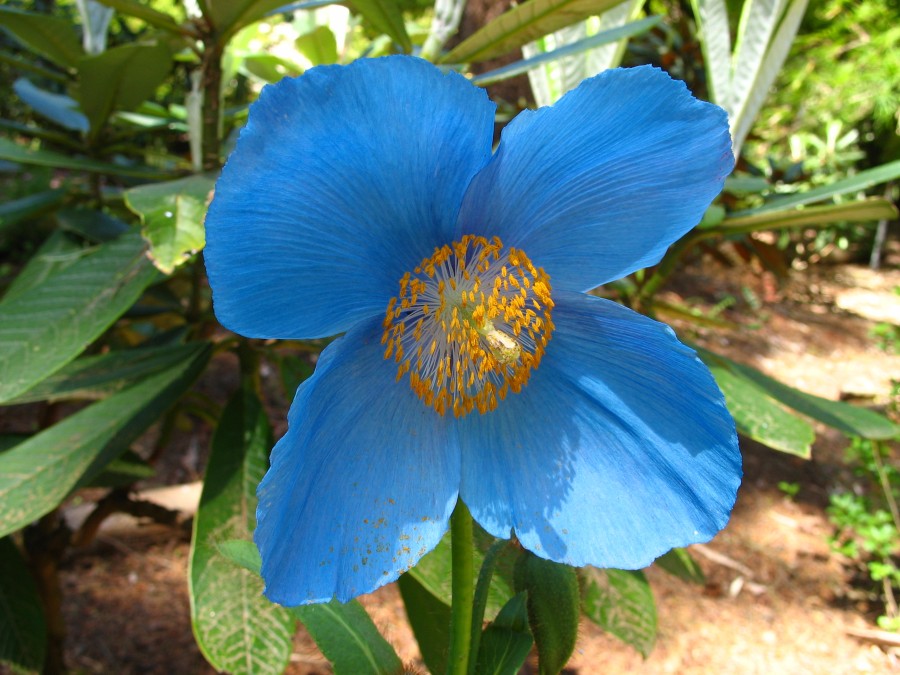 The Himalayan Blue Poppy is one of the species named after Eric Bailey. He discovered it while mapping the Tsangpo River.

Bailey is commemorated through three specimens that were named after him: a Tibetan snake, Thermophis baileyi, an ungulate called the red goral, Naemorhedus baileyi, and the renowned Himalayan blue poppy, Meconopsis baileyi. He published four books on his expeditions, including Mission to Tashkent about his bizarre 16-month hideout.

The American Museum of Natural History in New York currently holds Bailey’s personal collection of 2,000 stuffed bird species. His papers and extensive photograph collections are in the British Library, London.

After 22 years in the exercise industry, offset by long-haul adventures around the world, Alex Myall found a better option a few years ago and has never looked back. She took a diploma in travel journalism, backed it up with travel industry certificates, then launched Chasing Dreams Travel NZ, her own travel agency.

Now she combines her love of writing and world travel with running her business from her home on the spectacular South Coast of Wellington, New Zealand, while simultaneously being mum to a gorgeous baby girl. She maintains a “life’s too short to do things by halves” attitude.